Highlighting and Label items on the screen 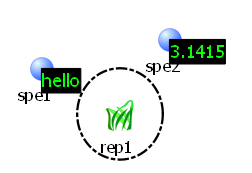 The CLabelsTool allows labeling and highlighting (drawing circles) on objects on the screen. It also provides convenient C/Python API functions, allowing C and Python programs to label and/or highlight items on the screen.
The C/Python functions are called displayText, displayNumber, and highlight. The C++ signals are also named the same.
Posted by Deepak No comments: 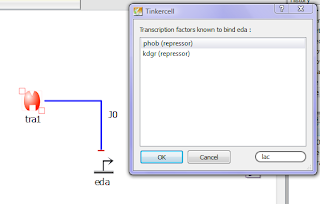 With this python function, users can:
Posted by Deepak No comments:

The C function tc_getFromList , or the equivalent python function pytc.getFromList allows C and Python programs to display either a list or a drop-down menu. When the user makes a selection, the index of the selection will be returned. 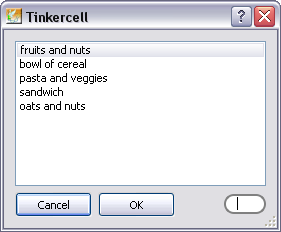 The following command generated the above dialog.

pytc.getFromList("What will you have for dinner?",("fruits and nuts", "bowl of cereal", "pasta and veggies", "sandwich", "oats and nuts"),0)


Changing the last argument will change the display to a drop-down menu (combo box), as shown below.

pytc.getFromList("What will you have for dinner?",("fruits and nuts", "bowl of cereal", "pasta and veggies", "sandwich", "oats and nuts"),1) 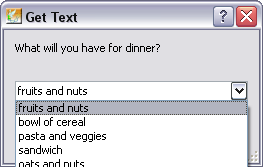 It is difficult to create intricate interfaces using the C API. What is more practical is to just write a C++ plugin. So, suppose you need a relatively complicated interface for a C function, then the procedure is as follows:

The Flux Balance Analysis function is one such example. The interface is a regular plugin, but it calls the C program (lpsolve.c) when the run button is pressed. The plugin can therefore respond to selection events and other events. The plugin creates a matrix that is passed on to lpsolve.c as input.

Normal C dynamic libraries are loaded using the LibraryThread class. However, since these C++ programs are different, the LibraryThread performs a check to see whether the "loadTCTool" function exists in the library. If it does exist, then the library is loaded as a plugin on the main thread and not as a threaded C program, which is usually on a separate thread. 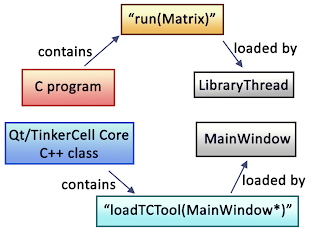 The diagram above shows how different libraries are loaded. Essentially, if the library contains the "run" function, it is assumed to be a C program. If it contains the "loadTCTool" function, it is assumed to be a C++ library that adds a new tool to the main window. The LibraryThread runs the C program on a separate thread and unloads the library when the program is finished. The C++ libraries represent widgets and other such tools which are only unloaded when TinkerCell exists.
Posted by Deepak No comments:

Antimony script is now integrated into TinkerCell. The NetworkX python module is used to perform the layout, since Antimony scripts do not contain graphical information.

More importantly, the visual side and the script side (Antimony) can update one another. This allows a user to shift from script view to and from graphical view any time.
Posted by Deepak No comments:

The lpsolve library has been integrated into TinkerCell. The code is in c/lpsolve.c and the lpsolve package is included in the c/lpsolve directory.
The generic outline of the code is as follows:
Posted by Deepak No comments: 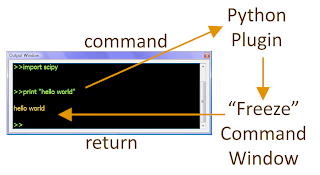