By using the tc_substituteEmptyModel and tc_substituteOriginalModel, it is possible to systematically remove each regulation from a design and check the results. The python plugin that does just that produces the following result. The code is given below. 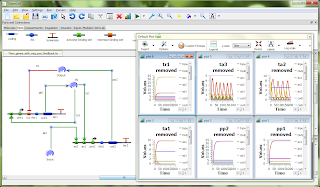 In the example below the input-output relationship is tested as different regulations in a feed-forward network are pruned. 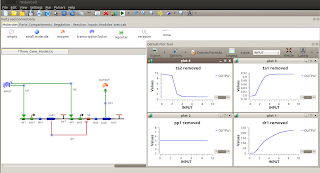 descr: Try removing each individual regulation one at a time and see how that affects the model

The code given below was used to generate parameter set for making a non-monotonic input-output steady state plot. The code uses Particle Swarm optimization algorithm. It allows multiple runs of the algorithm for finding multiple minima. 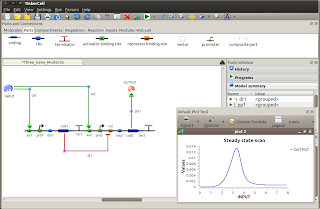 The TryModelVariants.py is a new python plugin that tries all the different models for the same "diagram". For example, in the diagram below two enzymes catalyze the conversion to themselves, i.e. both are autocatalytic. One might suspect that such a system will become bistable, somewhat like the genetic toggle-swtich. However, this system is only bistable when modeled using steady state assumptions (i.e. Michaelis-Menten) and monostable when modeled using simple mass-action reactions. This python plugin can be used to varify such model-dependent behavior. This shows how models should be double-checked before trying to use them to make conclusions about the real system. 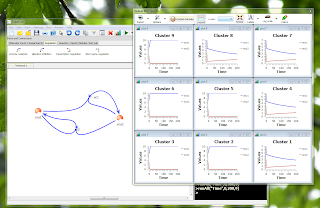 The tc_clusterPlots function now returns the results of the clustering. Earlier, it was just plotting the clusters. Now, plugins can use the returned values to identify which plot each of the inputs belong in. For example, the TryModelVariants.py plugin uses this information to identify sub-models (e.g. whether or not to include mRNA, how to model transcription regulation) that are responsible for creating different behaviors. The plugin outputs the cluster plots and outputs the sub-models in each cluster in a file. 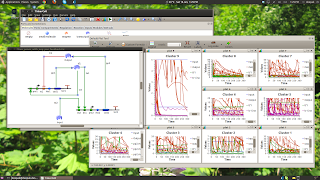 and the sub-models for each cluster

...the file contains all the clusters, but those are not shown here.

Composite parts were present in TinkerCell for some time, but they did not behave nicely. Now they do. Composite parts are basically containers with other parts. They can be snapped together. 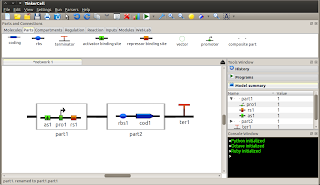 An architecture for incorporating experiments 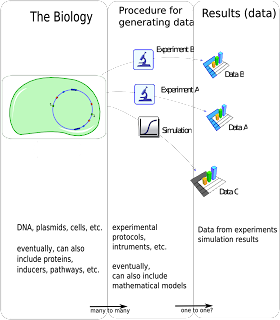 The above diagram represents a general data-representation TinkerCell is assuming. TinkerCell represents the "biology" (not the mathematical model). There are methods such as numerical analysis or wet-lab experiments that take the biology and generate data. The middle area (i.e. experiments and simulations) should connect the biology to the data -- probably the main challenge.
Posted by Deepak No comments: 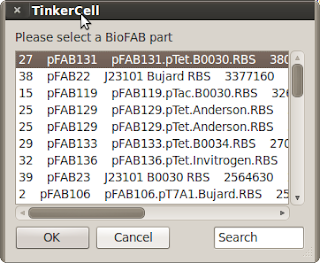 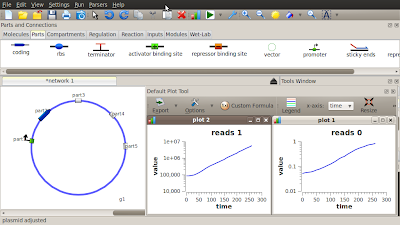 The above screenshots are from a python plugin that gets BioFAB (biofab.org) parts and automatically places the parts on the screen. It also plots the experimental data available at BioFAB.

The next step is to automatically generate the model and perform basic parameter estimation.
Posted by Deepak No comments:

"Dim" certain regions of the model 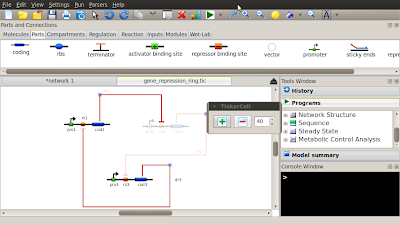 The "sun" icon next to the zoom icons in the top toolbar allows users to adjust the transparency of selected regions on the screen.
Posted by Deepak No comments: